Hello All!  I am sure you have been waiting anxiously to see how my semester ended and what exactly happened during MD3.  Well, .......Life happened.  I must admit that it was a very tough semester but I pulled through without letting it break me down.

It began with a peer and me working on a project to educate Anguillians in CPR but it didn't end that way.  There was some resistance from the community that we did not anticipate.  Luckily, we were still able to educate the students at school.  Because it was a student-run project, we were able to log some tutoring hours because the certification is a requirement for the AICM semester that is currently held in Chicago.  If you want to see a video I made about the project, you can look here.  Never mind the music.  It was my first one.  A better quality video is to be uploaded shortly.  The information about the project is also to be updated as well. 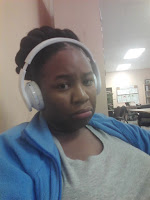 Also during MD3, I lived every moment in the library.  There were some naps, tears and laughing that may have occurred but mostly studying to say the least.  I say all this to assure you that although I did have my outlet by teaching CPR that I also made time to study.  And here's some proof!

I still ate well and lost some weight through the semester but I assure you that it wasn't stress.  I was supposed to be preparing for the annual 5K event that is held on the island by the Red Cross but that didn't exactly happen because I wanted to sleep a little bit.  But I can sleep when I'm dead right?  Plus sleep is overrated. 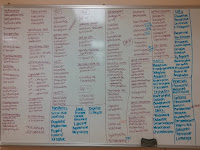 So even after all the studying and writing to memorize drugs and pathologies, it still wasn't enough.  I when I say that, this wasn't enough.  Yes this is as bad as it looks to learn.  But I  prevailed with this material.  Life was a juggling act and unfortunately two things fell out of place.

So what am I saying?  I am saying that I did not pass two classes during the regular semester.  I did not plan to put myself in that position but I must say that things happen beyond your control.  What could have contributed to this?  It could be many things.  It could be the added stress of having class until 5 pm each day and taking a break until 7 pm or it could be the time that I stayed up late to bake and eat chocolate chip cookies.  Or from having to write a 5 page paper for Walden University or completing my vRx assignment for pharmacology.  As you see, it could be a number of items.

So what now?  Well I went home for break after my exams.  My family and friends were very supportive and demanded that every moment be dedicated to studying.  Honestly, I did not want to study.  I was becoming content with the idea that if I had to stay a semester longer that I would be okay.  After some thought, I began to develop the confidence that these exams were to be conquered by me.  So here at Saint James, currently, there is an opportunity to "redeem" yourself if you fail the course during the regular.  So there is a cumulative exam that you have the opportunity to take.  In order to pass the course of which you must score a 70% and that allows you to pass the course.


I PASSED!!! Woohoo!!!  I am now in my final semester of Basic Sciences!  So let me catch up on what I missed in the last 3 days.  So I will run now to study hard and make all of you proud!  Oh what can this semester bring?

And keep the charge of the LORD thy God, to walk in his ways, to keep his statutes, and his commandments, and his judgments, and his testimonies, as it is written in the law of Moses, that thou mayest prosper in all that thou doest, and whithersoever thou turnest thyself: That the LORD may continue his word which he spake concerning me, saying, If thy children take heed to their way, to walk before me in truth with all their heart and with all their soul, there shall not fail thee (said he) a man on the throne of Israel.
-1 Kings 2:3-4, KJV
Posted by Ariel Carson at 3:53 PM No comments:

Send me a Message!